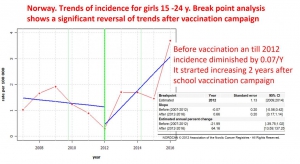 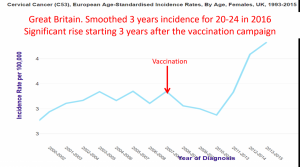 Medicine becomes propaganda: 88% efficiency: the magic and misleading rate manufactured and used by the FDA to falsify communication on Gardasil [1]  and extend its indications.

88% efficiency, yes but on what? The new discovery for the Gardasil Pub: the new criterion, the « combined criterion » that mixes everything? –  infections most of which disappear without treatment, benign lesions that disappear spontaneously, benign lesions healed by small operations, cancer in situ and invasive cancer -, does not seem to have disturbed our expert doctors and journalists, all too often parrots, who continue the propaganda for this ineffective vaccine to prevent cancers (and only effective against infections, and dangerous in vaccinated populations). And yet!

From standard criteria (incidence of invasive cancer) to substitution criteria (infection, benign dysplasia) to a combination of criteria mixed without scientific logic.

Thus, the combined criterion refines the falsification of the surrogate criteria, which had already largely relieved the labs’ constraints in getting the drug to be accepted by the agencies (FDA for the USA, EMA for the European Union) [2]  with deleterious effects already widely demonstrated. [3] [4] .

88%: the magic rate manufactured and used by the FDA to expand Gardasil’s indications

« in a study in approximately 3,200 women 27 through 45 years of age, followed for an average of 3.5 years , Gardasil was 88% effective in preventing a combined end-point of persistent infection, genital warts, precancerous and vaginal lesions, precancerous cervical lesions and cervical cancer related to HPV types covered by the vaccine. The FDA approval of Gardasil 9 in women 27 to 45 years of age is based on these findings and new data on the long-term follow-up of this study. «

We are not stopping the progress of manipulation, deception, falsification

The deception, in order to make people believe that such a drug will revolutionize the treatment of cancer, or that a vaccine makes cancer of the cervix disappear, is especially huge when it is claimed to prevent a cancer, that normally appears after decades, by brandishing as proof a study carried out over three years!

FDA is both judge and party through its funding

The Federal Drug and Food Administration, responsible for drug safety for Americans, represented, in the previous century, the model of an effective health agency serving the public.

But about twenty years ago, this federal agency, accused of being expensive and too fussy, was asked to seek funding from pharmaceutical companies (which it is mandated to regulate!); these now provide it with nearly half of its budget.

But can one, without risk, ask poorly paid judges to get paid by litigants [5] or police officers to collect part of their salary from possible criminals [6]  ? Since this interference of private companies in the FDA, the market authorization of new drugs has been considerably accelerated, but their promotion now takes precedence over the safety of the population.

This is evidenced by the extension of Gardasil’s marketing authorization to women up to the age of 45 and the misleading presentation of results that closely resembles that of the MSD laboratory’s communication services.

How to manipulate the numbers to make them friendly and vaccinate the entire earth or almost?

In this release [7] which is totally misleading and partially false, the FDA claims that the vaccine « prevents 88% of persistent HPV infections, genital warts, precancerous lesions and HPV-  related cancers « , all together, of course, this is simpler ! « Colossal » 88%! Let’s not think anymore, we must immediately get vaccinated and vaccinate all the women we love! And in passing, let’s not forget the men, who might be jealous. [8] Thus, in the same opinion of the FDA:  » The efficacy of Gardasil 9 in men 27 through 45 years of age is inferred from the data described above in women 27 through 45 years of age, as well as efficacy data from Gardasil in younger men (16 through 26 years of age) and immunogenicity data from a clinical trial in which 150 men, 27 through 45 years of age, received a 3-dose regimen of Gardasil over 6 months.”

How to manipulate information to make an aberrant result credible to the naïve and complacent public?

But where does this magic number come from? The FDA failed to give specific references to the study, forcing us to analyse the meagre data provided in its press release, relying on conventional estimates of frequencies of targeted diseases cited in the release.

To obtain this too good result, the authors applied the good old recipe of lark and horse pâté [9] (or more recently lasagnes with beef mixed with horse). Instead of presenting the results of the vaccine on each targeted pathology (persistent infection, warts, benign dysplasia, cancer in situ, invasive cancers), the authors concocted a globalized evaluation criterion [10] [11] , combining all the targets. A quick reading of this release could thus make believe that the vaccine would be able to prevent 88% of invasive cancers. In primary school, we learned not to add apples, pears or bananas on the pretext that it was fruit, or red balls with yellows etc… We know that the grade level has lowered, but to such an extent?… Do the authors of this communiqué really take us for young children?

How many Invasive cervix cancers can we observed in 3,200 women followed for 42 months?

For truly cancerous lesions, obtaining such a result on a sample of 3200 women aged 27 to 45 followed for 3.5 years is totally impossible.

On such a sample, the world-standardized [12] incidence [13] of this cancer in USA , close to 13/100 000 [14], makes it possible to evaluate the global probability of invasive cancer at 1.45 woman! How could the vaccine reduce by 88% this figure of 1.45, and how could this ludicrous figure be significant of an efficiency (moreover estimated for three years on a cancer which is classically supposed to develop in twenty or thirty years)? We are here obviously in a lack of major power of a statistical study and this, obviously, has no value. It is incredible that the FDA dares to make a release on such data.

To highlight the evolutionary trend of a very rare event, it is necessary to have large samples followed for a long time. And the most convincing of them is the whole population of vaccinated women. With the cancer registries, we have indisputable statistical data covering all the populations of four countries followed 7 to 9 years (from 2007 to 2016). These data tell a completely different story from the golden legend of the laboratories spread by the FDA. In all the countries that have largely vaccinated their young girls, the incidence of invasive cancers has increased sharply (sometimes exceeding 100%) in the vaccinated age groups [15] [16] that would justify that the responsible agencies impose a moratorium of at least several years and that independent studies be conducted to understand the phenomenon. 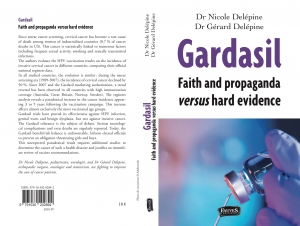 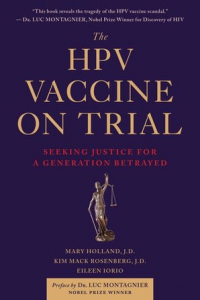 So, what to believe? A magic number supposedly obtained by a small study, unable to establish it and which is not even referenced by the American Congress Library [19], or the official statistics of cancer registries covering hundreds of thousands of women followed for about ten years ?

For HPV infections, the results announced in the release resemble what is reported in younger girls, but are highly suspect for women 27 to 45 years old, in regard to the data acquired from science; indeed, all published trials have shown that infection occurs early (at first sexual contacts) and that the vaccine is ineffective when the infection is established [20] ; it is for this reason, by the way, that all vaccination campaigns preferentially target very young girls (11-13 years) and official bodies continue to vaccinate virgins preferentially. This is far from the FDA-approved extension in this release for women 27 to 45 years old.

How could one believe that the vaccine would have suddenly become effective in these women, who were a priori already infected by the virus? And in any case, this figure would only concern the nine strains of HPV among the 150 to human tropism and the 18 strains supposedly oncogenic. What is the interest in women to prevent an infection that gives no trouble and spontaneously disappears by itself in less than two years in 90% of cases? [21]

As Merck’s’ package leaflet clearly states, the Gardasil does not treat cancer or infections, and only prevents infections. As for cancer, the lab (as well as the HAS[1] in France by the way) warns about the lack of demonstrative data of its prevention of invasive cancer. To avoid lawsuits, may be ?

However, the official indication of the vaccine and the possible motivation of the parents is first and foremost the prevention of cancer; the FDA’s combined criterion is an advertising invention which has no medical significance whatsoever, but which has allowed the FDA to claim a reduction of 88% in the number of women (1.45 out of 3200) who may have suffered from invasive cancer!

RETURN TO THE PROTECTIVE ROLE OF HEALTH AGENCIES

Its use and its wide circulation prove that the commercial propaganda represents the real goal of this release. How can we still trust an institution that provides such unreliable data? It is high time for the US State to oblige the FDA to once again fulfil the mission for which it was created: to guarantee the health security of the populations and to stop acting as a promotional agent for pharmaceutical novelties with uncertain results.

[1] In a study in approximately 3,200 women over the course of 3.5 years, Gardasil was 88 per cent effective in the prevention of a combined endpoint of persistent infection, genital warts, vulvar and vaginal precancerous lesions. cervical precancerous lesions, and cervical cancer related to HPV types covered by the vaccine. The FDA’s approval of Gardasil 9 in women 27 through 45 years of age is based on these results. See ref 4

[2] https://www.agoravox.fr/tribune-libre/article/l-innovation-en-cancerologie-quels-202718 the text in French

[3] Cancer Drugs Approved on the Basis of a Surrogate End Point and Subsequent Overall Survival an Analysis of 5 Years of US Food and Drug Administration Approvals JAMA Intern Med. 2015; 175 (12): 1992-1994

[4] The gold standard for oncology efficacy is the long-term overall survival rate (usually the percentage of patients living at five years of age), but drug companies primarily use the tumour response rate, or what they call duration of progression-free survival (in fact duration of tumour stability); details of these modifications of criteria are given in the book « Inefficient, Often Toxic and Overpriced Drugs”, by N. and G. Delépine, Michalon Ed 2017 (french)

[5] Any judge convicted of having received any advantage from a litigant would be immediately sanctioned.

[6] A very famous policeman was recently convicted on this ground.

[9] Complete a small lark pie with horsemeat to sell a product with supposedly equal ingredients (a horse, a lark).

[10] Selected judgment criterion of an essay; « Endpoint » = endpoint detection to judge the response of the study.

[13] The cancer rate compared to a standardized population.

[16] https://childrenshealthdefense.org/news/has-gardasil-really-eliminated-cervical-cancer-in-australia/ with the curves established by Dr Gérard Delépine from OFFICIAL CANCER RECORDS.

[19] PubMed, available free of charge on the internet, makes available to the public the largest medical database in the world, whether published articles or medical tests; consultation did not allow us to find publication of the study mentioned by the FDA.

[20] This curative inefficiency of the vaccine is also specified in the Gardasil leaflet.