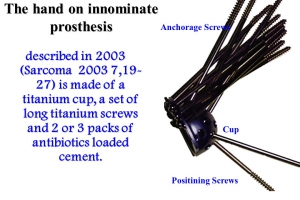 ISOLS2019 long term follow up of acetabular prostesis for malignancies

The “hand on innominate prosthesis” described by us in 2003 (Sarcoma 2003) is made of a titanium cup, a set of long titanium screws and 2 or 3 packs of antibiotics loaded cement. To evaluate the orthopedic results of the implants, we take in account the score at last local control. We use the numerical rating assessing each of the seven variables of the MSTS system on a five-point scale, giving a maximum score of 35 points, recorded as 100 %. Between 1990-2007, 84 patients (p) with peri acetabular bone sarcoma (40), metastases (44) were treated by internal hemipelvectomy followed by this reconstructive procedure. 23 survivors (20/40 sarcomas, 3/44 metastases) have been followed more than 5 years. Histology of 23: chondrosarcoma: 8, osteosarcoma:5, Ewing: 5, MFH: 1, anaplasic sarcoma :1, renal cell carcinoma 2, thyroid 1. Resection included 4 zone 2, 6 zone 2+3, 9 zones 2+1, 3 zones 2+1+4, and 1, zones 1+2+3.

Median FU of these 23 p is 18,5 years (133- 301 months). Postoperative complications included 1 deep infection, 6 hip prosthesis dislocations (26%), 2 neurologic palsies. Late complications were 2 deep infections, 8 polyethylene wears and 8 loosening (5 iliac, 3 femoral). 17 p (73 %) had to be re operated. The type of orthopedic complications is significantly correlated with the topography of the resection: loosening of the iliac prosthesis threatens only resection of zone 1.

The mean functional result, rated according modified Ennecking’s grading system, was 80%. Result similar to those described in the literature for custom made innominate prosthesis and better than those of published alternative reconstructive procedures.

The immediate weight bearing and the durability of such a procedure plea for using it after acetabulum resection of zone 2 and 3 (we did not observe loosening of the iliac reconstruction). Such a procedure can also be used after total iliac wing resection, even when including zone 4. But in this location loosening is frequent and pleas for reinforcing the reconstruction with the head and neck of femur when there are free of tumor as advocated by Puget (RCO 2012)