Aim of the study. Few cases of periosteal Ewing (PES) were reported and surgical implications of such a diagnosis has not been sufficiently underlined. Our goal is to evaluate the incidence of this topographic form and the consequence on surgery and long-term results.

Material. The 7 reported cases fulfilled the diagnosis criteria of Bator: Ewing of bone histologically proved, with pure periosteal location without medullary extension. The CT scan was the most reliable exam for diagnosis. Histology of resected specimen may ignore an initial medullary involvement cured by preoperative chemotherapy. M.R.I. can overestimate a PES with intense inflammatory reactive tissue inside the medullary canal.

Out of 175 Ewing of bone of our file, only 7 (4 %) could be classified as PES. 6 involved the femoral bone (4 diaphyseal orand 2 metaphyso diaphyseal) and one the tibia (distal metaphysis). Age of patients at biopsy ranged 11 to 19. Two patients have been referred to us after biopsy. One was irradiated before we saw her. According to Ennecking classification, 3 were graded IIA and 4 II B. All patients were treated by resection after preoperative chemotherapy. With an median follow up of 198 months, all 7 patients are event free survivors.

In three cases a transcortical biopsy was performed compelling to perform a resection interrupting the long bone continuity; Two patients were reconstructed with long stem prosthesis and were re operated 2 and 4 times during the 18 and 19 years of follow up. For the distal tibia the limb salvage using allograft and vascularized fibula was followed by pseudarthrosis then infection with a total of 6 operations (in 3 years) before cure. In four cases the biopsy did not open the medullary bone; Nevertheless in three case sthe local extension compells to interrupt the long bone continuity before allograft reconstructions with 2 excellent and 1 good long-term results. The last case could benefit of partial resection of bone with cement filling and excellent immediate result.

Comments.With these cases (6 had been already reported), only 35 cases of PES have been described, 32 / 35 located on long bones. Most were stage II disease, treated by chemotherapy and surgery. At last follow up 33 / 35 patients (94 %) were in first remission confirming the good prognostic value of PES.

Conclusions.The surgical consequences of PES must be underlined. When computed imaging permits to suspect this diagnosis biopsy should be confined to the soft tissues and/or the cortical bone without medullary contamination. Such a procedure eventually permits subsequent partial resection without interruption of the bone continuity, allowing easier reconstruction and much better long term functional results. 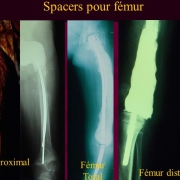